“DON’T EVER USE THE WORD SMART WITH ME…JOE” 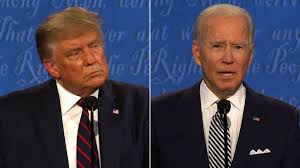 “DON’T EVER USE THE WORD SMART WITH ME…JOE”

In their first meeting, hardly a debate, presidential candidate Joe Biden touched an exposed nerve in Donald Trump’s thin skin which forced an eruption of projected anger. It was one of many outbursts and interruptions which left political pundits shaking their heads and feeling like student teachers on a grammar school recess yard.  Did you repress it?  You can find the angry retort on YouTube here: https://www.youtube.com/watch?v=MOsW3cj53FI

Chris Wallace was at a loss too, and he couldn’t restrain Trump’s anger at having his “stable genius” considered, much less questioned.

My suggestion?  Make sure you bring it up again this week, Joe.  Watch him respond like Margaret Hamilton in The Wizard of Oz after being hit by a pail of water.  “All my beautiful dreams…….”

And projected anger? “Joe, you said you went to Delaware State but you forgot the name of your college.  You graduated the lowest or almost the lowest in your class.  Don’t ever use the word smartest with me…”

As for Trump’s self description, he graduated either number one or with honors from prestigious Wharton College.  However, according to Jonathan Valania , in the City Life section of Philadelphia Magazine, a lot of mystery surrounding Trump’s self-described ascension into academic superlatives at Penn’s Wharton College are quite questionable.  And his responses to those who question his intelligence, his immediate retort is anger and vehemence. 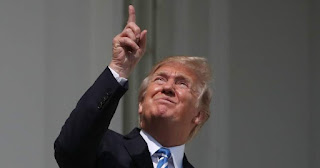 “Ahh, the college transcript. Trump famously graduated from Penn’s Wharton School in 1968 — a fact he reminds audiences of over and over again. (Per Penn’s student newspaper, the Daily Pennsylvanian, he publicly name-dropped Wharton 52 times between June 2015 and January 2018.) But despite all his humblebragging about that Wharton degree, Trump has never allowed his academic performance there to be made public.”

“’This was a major, major thing with Trump — that people might think he’s stupid,’” Michael Wolff told me around the time of Siege’s publication earlier this summer. “’The focus of that for Trump is the college transcripts, which are apparently terrible. I’ve spoken to friends of Trump from that time, and this was a guy that was obviously not interested in school and possibly never read a book in his life. For everyone that had known him then and years afterward, the assumption was that he had terrible grades, he was a lackluster student at best.’”

Remember also that family member and psychologist  Mary Trump in her recent release of Too Much and Never Enough said that it was common knowledge that Donald had paid someone take the college entrance exams for him before entering Penn.

“In truth, Trump’s Wharton GPA is just one of many mysteries surrounding the 45th president’s relationship with Penn, Philadelphia’s most powerful private institution, which, unwittingly or not, helped unleash Trump on the world. Over the years, there have been rumors about how Trump might have gotten into Penn in the first place, and how much — or how little — he’s donated to the school as an alum.” 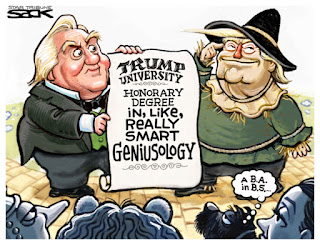 “Perhaps the biggest reason for this shroud of mystery is Penn itself; the school’s sphinx-like reticence about its most famous alumnus plays at times like a silent scream. For instance, Penn has never had Trump deliver a commencement speech or conferred an honorary degree on him. In the wake of his election, Penn tour guides were discouraged from bringing up the T-word and issued simple instructions for handling questions about Trump’s tenure at Penn: Keep it short and sweet — “’Yes, he graduated from Wharton in 1968’” — and leave it at that. Tell Penn you’re writing an article about Donald Trump’s time there, and you’ll get the academic version of name, rank and serial number: “’Donald J. Trump earned a B.S. in real estate, which was awarded on May 20, 1968,’” says Ron Ozio, Penn’s director of media relations, declining my request for an interview. Which is peculiar, given that most universities make a lot of marketing hay out of an alumnus in the White House — and Trump is Penn’s first.

“It’s rare for a professor to disparage the intelligence of a student, but according to attorney Frank DiPrima, who was close friends with professor William T. Kelley for 47 years, the prof made an exception for Donald Trump, at least in private. “’He must have told me that 100 times over the course of 30 years’,” says DiPrima, who has been practicing law since 1963 and has served as in-house counsel for entities including the Federal Trade Commission and Playboy Enterprises. “’I remember the inflection of his voice when he said it: ‘”Donald Trump was the dumbest goddamn student I ever had!”’” He would say that [Trump] came to Wharton thinking he already knew everything, that he was arrogant and he wasn’t there to learn.” Kelley, who passed away in 2011 at age 94, taught marketing at Wharton for 31 years, retiring in 1982.”

“This assertion (that Trump was number one in his class at Wharton) appeared in a fawning New York Times profile of the Trump Organization published in 1973, the same year the Department of Justice sued Donald and his father Fred for housing discrimination for refusing to rent to people of color. Sample paragraph:

“Donald, who was graduated first in his class from the Wharton School of Finance of the University of Pennsylvania in 1968, joined his father about five years ago. He has what his father calls “drive.” … “Donald is the smartest person I know,” he remarked admiringly.

“The claim was repeated in another doting profile of Trump in the New York Times in 1976. Noting that practically every article ever written about Trump in the wake of the Times profiles parroted the “’first in his class’” claim, the Times finally corrected the record in yet another eye-roll-inducing profile published in 1984 (“Spending a day with Donald Trump is like driving a Ferrari without the windshield. It’s exhilarating; he gets a few bugs in his teeth”), declaring that the notion that Trump finished first in his class at Wharton was contradicted by the university’s commencement program.

“Trump himself finally copped to this in a 1988 New York magazine story written by Julie Baumgold. “’Okay, maybe not ‘first,’ as myth has it,’” Baumgold wrote, “but he had ‘the highest grades possible.’”

“As Trump admitted in The Art of the Deal, all he got out of Wharton was bragging rights: “’In my opinion, that degree doesn’t prove very much, but a lot of people I do business with take it very seriously, and it’s considered very prestigious. So all things considered, I’m glad I went to Wharton.’”

Joe, it’s not a chink in the armor, it’s an opening you should drive through every chance you get.  Good luck this week.  And go get him.

Email ThisBlogThis!Share to TwitterShare to FacebookShare to Pinterest
Labels: Resist