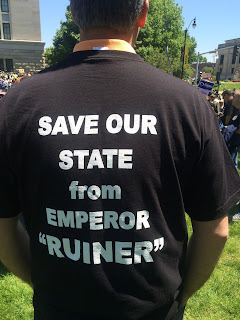 Although some reports described the crowd at today’s Anti-Rauner Rally in Springfield as “lesser” than last year, one radio station on our way home called the numbers as exceeding 10,000.  Another SJR twitter feed guesstimated 8,000.

The throngs of laborers kept arriving until well after 11 a.m., marching together down the blocks after walking past the Governor’s mansion, all in various colors – familiar AFSCME green, electrical workers neon yellow, darker green, reds, - a panorama of groups and unions representing the working people and middle classes of Illinois.

Rauner – the same man who ducked and dodged unions and working class people when he traveled the state early in his administration to “sell” his Turnaround Agenda – was missing from the scene.  Away.  Off site.

On the dais of the stage, speakers warmed up and began just as the Senate was being called to session; however, present behind the voices decrying the Governor, many legislators (mostly Democratic and a few Republicans) sat to support the rally and workers they represented. 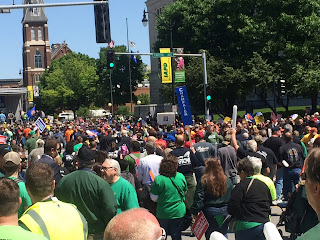 From the walkways and balustrades of the Capitol, other legislators watched what was an energetic, boisterous, and unified crowd calling for an immediate resolution to the Governor’s unwillingness to compromise.

In the Capitol, service providers for healthcare were meeting under the statue of Lady Illinois and discussing their options for possible employment and projections of future failures for service providers as the budget impasse waxes on.  Senator Dan Biss and other legislators looked on and listened as these health care workers searched for answers to the terrible predicament in which they and their charges now find themselves. 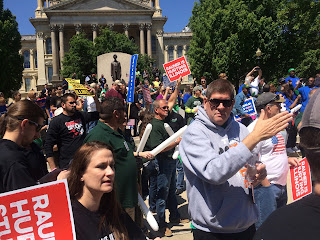 Outside, speakers came and went – talking to a loudly responding crowd of safety nets stripped away by Rauner, of being dropped from a healthcare position due to cuts and unable to find opportunities due to MAP Grant cuts, of a Governor who promised as he sought office to shut “it” down if that was what it took to get his way.

But the greatest unexpected moment (for me and my companion) came when Speaker Madigan decided to address the crowd after Senate Leader Cullerton’s brief promise to be always on labor’s side.

If anything, Madigan has always been taciturn and circumspect in his comments regarding the Governor, their political relationship, and the future of budget negotiations. 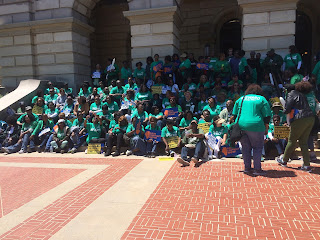 Madigan asked the assembled crowd to provide a strong response for each of the areas that he described as being threatened by our current Governor, which he offered rhetorically by proposing “Would you like…?”

The façade was removed.  The answers of 9,000 workers were clearly heard.

Not tomorrow.
Posted by John Dillon at 6:06 PM